This year, the winter in the Vernadsky station area has become the warmest for the entire time of observations in this region! The average air temperature for the winter is -2.13°C. This is 0.4°C warmer than the previous peak registered in 1998.

The heat anomaly covers most of West Antarctica, the Antarctic Peninsula (near which the Galindez island is located) and the water area of the Weddell Sea behind it. 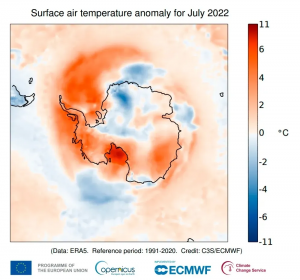 Instead, this year, the absolute minimum air temperature has barely crossed the mark of -8°C. Thus, its warmest records for July and August for all years of observations resumed. As a rule, the lowest temperature values for the year are in the range of -15 …-30 °С.

As in 1998, this year, because of the warm winter, no ice cover was formed around Vernadsky, and only floating broken ice packed the water area from time to time. Therefore, Ukrainian polar explorers could maintain navigation and conduct marine scientific research almost throughout the Antarctic winter.

Unfortunately, it was not possible to study the properties of snowflakes in blizzards, because the snow was mostly wet and prone to clumping. For the mentioned research, dry snow is needed, which is carried by the wind throughout the vast expanses of ice and glaciers.

Instead, the warm weather contributed to an increase in moisture in the atmosphere, and therefore to an increase in the amount of precipitation. So far, they are still in the form of snow: at the end of winter, the height of the snow cover near Vernadsky crossed the mark of 2.5 m and continues to approach last year’s record of 3 meters. Such snowfalls are rather annoying to our winterers, because wet snow is heavier, so it is more difficult to clean it.

But there is good news: due to the lack of ice, penguins are already visiting Vernadsky.

So far for exploration, but we assume that the big return of these birds is not far off.

We remind you that the seasons in the Southern and Northern Hemispheres are out of phase: when it is summer in Ukraine, it is winter in Antarctica, and now spring has begun there.

Thanks for the information to Denys Pishniak, head of the Department of Atmospheric Physics and Geospace of the National Antarctic Scientific Center.