Ukrainian delegation has returned from Hobart, Australia, where in the period of October 21 – November 1, 2019 a meeting of the XXXVIII Session of the Commission for the Conservation of Antarctic Marine Living Resources, CCAMLR took place. The session was attended by delegations from all 25 member countries of the Commission. This year, the CCAMLR parties congratulated a new member of the Commission, the Kingdom of the Netherlands, which received this status in 2019.

The Ukrainian delegation included experts from the Institute of Fisheries and Marine Ecology (IFME) of the State Fishery Agency of Ukraine, the State Institution National Antarctic Scientific Center of the Ministry of Education and Science of Ukraine, as well as representatives of Ukrainian fishery companies. 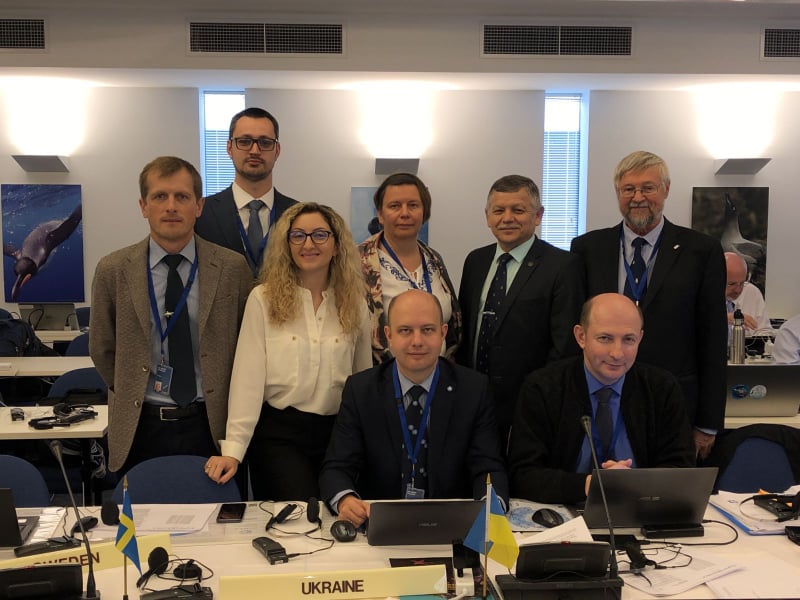 During the Working Group on Fish Stock  Assessment, IFME scientists presented a summary report on the results of scientific survey of toothfish in Subarea 48.2 (this work was carried out with the involvement of the Ukrainian vessel Simeiz), and a toothfish survey plan in Subarea 48.1 with the participation of another Ukrainian vessel, Calypso. It was also decided that in the 2019/2020 season the Ukrainian vessel Marigolds would be involved in the implementation of another Antarctic scientific program together with the vessels of New Zealand and Korea.

CCAMLR Scientific Committee has confirmed an estimate of krill stock at 62.6 million tons. The assessment was based on the results of international acoustic surveys of Antarctic krill within the Area 48 in 2018/2019 season (in this survey also took part the Ukrainian vessel “More Sodruzhestva” of IKF Ltd fishing company, on board of which scientists from IFME and NASC worked).

The Antarctic krill’s stock size indicates that, for almost 20 years of the absence of such global scientific assessments, the stock of krill within area 48 does not decrease and the raw basis for the krill fishery remains fairly stable.

The first related to the results of scientific observations on the success of breeding of two penguin species in the area of the Ukrainian Antarctic Akademik Vernadsky station under CEMP network of automatic cameras since 2016.

The second report contained preliminary justification for the creation of the Antarctic Specially Protected Area (ASPA) around the Argentine Islands, the adjacent islands of the Wilhelm Archipelago and the mainland coast of the Graham Coast (in accordance with the requirements of the Protocol on Environmental Protection to the Antarctic Treaty).

This area on the west coast of the Antarctic Peninsula is of particular interest for ongoing and planned research and includes CEMP sites around the Akademik Vernadsky station; monitoring data collected from these sites are submitted annually to the CCAMLR Secretariat. The Commission highly appreciated the activities of Ukraine in creating the ASPA and supported the continuation of this work.

Proposals for the creation of new Marine Protected Areas (MPAs) in eastern Antarctica, the Weddell Sea and the western shelf of the Antarctic Peninsula, as well as research and monitoring plans for existing MPAs were not approved by the Commission because of absence of consensus. The main opponents of projects on creation of these Marine Protected Areas are Russia and China.

At the same time, Ukraine maintains a constructive dialogue with the countries initiating the new MPA, in particular for taking into account the actual Ukrainian environmental initiatives and preserving the conditions for the rational use of aquatic biological resources in the Convention Area.

Another important event for CCAMLR and Ukraine was the decision of the Commission to create a General Capacity Building Fund accessible to all CCAMLR Member countries according to the role, activity and potential of the applicant countries. This fund will facilitate more productive participation of member countries in the activities of the Commission, in particular by supporting special-purpose research programs.

In general, the XXXVIII CCAMLR Session noted the significant progress of Ukraine regarding participation of our state in the processes of studying, protecting and managing the rational use of Antarctic marine living resources.