The current season of Ukrainian women biologists Karina Vyshnyakova and Iuliia Ivanchykova, who went to study the Southern Ocean on December 8, 2020, is finally over! They are taking home a large and exotic “catch”, including over 300 photos of whale tail fins … and 5 kg of ocean fish parasites.

For about 4 months, NASC female scientists carried out research on the Ukrainian krill trawler More Sodruzhestva. During this time, each of them spent 145 hours observing whales from the sites on the captain’s bridge.

“We have registered more than 2700 encounters with marine mammals from both sides of the vessel. Humpback whales were seen in 70% of cases and up to a certain point there were more of them near the South Orkney Islands. But in the second half of January, larger fin whales began to come to the water area, competition with which was difficult to withstand for humpback whales. Although we have repeatedly noticed one or two humpbacks near the fin whales. Other cetaceans, such as minke whale, southern right whale, and killer whale, have been observed much less frequently, with a total of 5% recorded”, – the researchers said.

This is a non-trivial result, which forces us to reconsider somewhat the understanding of how cetacean populations recover from a former predatory catch and what kind of competitive relationships arise between them.

In total, we managed to collect about 300 photos of humpback unique tail fins which should replenish the photo catalog launched at Akademik Vernadsky station in 2018. With the help of such photo-IDs, whales’ migration routes are established within the entire World Ocean; they also can help to identify which of the populations are local ones, and which migrate over long distances.

In addition to whale-watching, Karina and Iuliia conducted parasitological studies of 17 species of Antarctic fish. They showed that almost every adult animal is infected with helminths, especially predators. All parasites from 7 groups were fixed by scientists and transported for further study in Ukraine. In total, this is as much as 5 kg of parasites from 130 fish! 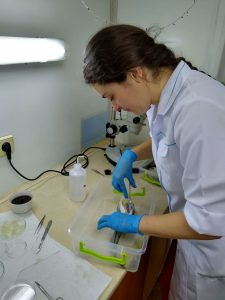 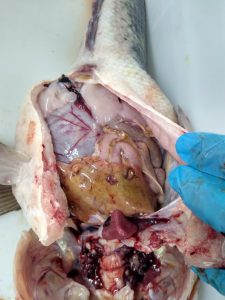 From each fish there were also taken otoliths, the so-called ear stones. On them, as on trees, growth rings appear annually in fish. That is why the otoliths can be used to determine their age and establish the rate at which these valuable target species are growing. Such information is needed to set overfishing restrictions, in particular to determine the size of the trawl mesh.
The scientists also carry with them 10 specially selected tissue samples from various Antarctic fish to test them for persistent organic contaminants and heavy metals. The analyzes will be carried out in one of the best laboratories in the European Union, and their results will help to better study the problem of pollution of the World Ocean and its inhabitants. In particular, to identify those organic pollutants that are globally distributed and are transported from our lands by currents to the polar regions, where they accumulate in the top levels of the food chain.