The research icebreaker Noosfera went to Antarctica: the route and the scientific program of the first voyage

Home
>
News
>
The research icebreaker Noosfera went to Antarctica: the route and the scientific program of the first voyage

Today, January 28, 2022, the flagship of the Ukrainian scientific fleet, the research vessel Noosfera, set off on its first voyage from Odessa to Antarctica. This is symbolic, because January 28 is considered the date of the discovery of Antarctica, and for Ukraine it is the date of returning to the study of the Southern Ocean after a 20-year break.

The icebreaker’s crew consists of 26 people – both Ukrainian and foreign specialists, who previously worked for the British Antarctic Survey. Also, on board there are scientists who will conduct research along the entire route of the Noosfera (more on this below).

First, the ship has a long journey to Punta Arenas (Republic of Chile). There, the second group of scientists exploring the Southern Ocean and the team of the 27th Ukrainian Antarctic Expedition, which should replace the current winterers at Akademik Vernadsky station, will board it. Further, the route will lie through the Drake Passage to our station. A variety of cargoes will be delivered to Vernadsky: from the annual supply of provisions to building materials and equipment, because this time, thanks to the icebreaker, more cargoes can be delivered directly from Ukraine.

After unloading the vessel, a scientific program will be carried out for several weeks in the Atlantic sector of the Antarctic and in the water area around the Antarctic Peninsula. 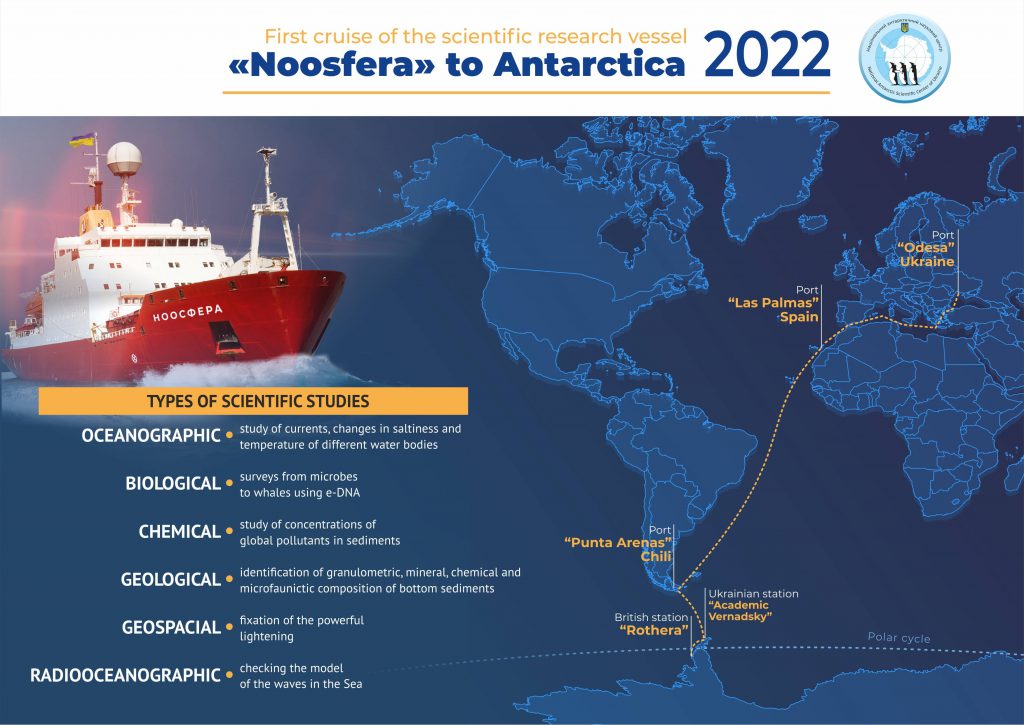 These areas have not only complex hydrophysical conditions that form the system of water masses of the oceans of the Southern Hemisphere, but also high biological diversity. Here are the main migration routes of krill, fish and whales. It is supposed to investigate currents, changes in salinity and temperature of different water masses, etc.

Thus, we hope to obtain unique data on how the oceanographic characteristics of these key points of the Southern Ocean have changed over the past three decades. After all, it is in this part of the world that the fastest rate of global warming has been recorded, so the ocean must respond to these rapid changes, and it is important to understand how this happens.

Biological research is planned within the mentioned test sites, as well as in some parts of the monitoring site of the American Palmer Station, with which Vernadsky is connected by a long history of joint research projects. They will include analysis of microbiological groups, zoobenthos, etc. Researchers will select the so-called environmental DNA (the DNA of all Antarctic inhabitants dissolved in water), which can be used to “certify” marine inhabitants and make a “census” of modern biodiversity in the Southern Ocean. Also, to track the migration routes of whales, we will continue to observe these animals and “photo hunt” for their tails, that we wrote about earlier.

Of particular note is the study of the content of global pollutants, in particular mercury, in bottom sediments. The samples taken during the voyage will be analyzed in the best EU laboratories for the presence of heavy metals and more than 67 thousand organic substances and their decay products. This applied research is being done to determine the baseline level of pollution in Antarctica in order to limit the production of substances that, according to the results of the analyzes, will be the most common and dangerous.

Another block of research is geological research. It is planned to take samples of bottom sediments from the deep part of the Southern Ocean and the area of the Argentine Islands to determine their granulometric, mineral, chemical and microfauna composition. This is necessary to establish the main patterns of sedimentation in the region of the World Ocean, which has been constantly in contact with Antarctica over the past several million years and in its deep-sea deposits has preserved evidence of the intensity of growth and decrease in the size of the ice cover of Antarctica, the dynamics and frequency of iceberg formation. That is, by bottom sediment cores to clarify the complex geological and climatic history of the icy continent.

Some measurements, in particular geospace and radio-oceanographic, will be carried out not only in Antarctica, but along the entire route of the vessel, since geospace extends over the entire planet.

During the voyage, high-precision radio receivers will register the radiation of conventional broadcasting stations, which, after reflection from the ionosphere and the ocean, will make it possible not only to study disturbances in geospace at altitudes of several hundred kilometers above the ship, but also to estimate the parameters of ocean waves, direction and speed using the same radio waves. within a radius of tens of kilometers from the ship. Together with the indicators of the ship’s weather station, this will improve the models of sea surface disturbances in different weather conditions and make better forecasts.

Also, the voyage will open up new opportunities for powerful lightning direction-finding, since the ship on its way to Antarctica will move exactly near the main centers of world thunderstorms – African and South American. Thanks to the ultra-sensitive VLF magnetometer installed on board, scientists will be able to monitor thunderstorms not only from Antarctica, as they have been doing for the past twenty years, but also to conduct research directly in tropical latitudes. This will significantly improve the accuracy and quality of global lightning direction-finding.

It is planned that during the voyage Noosfera will cross the Antarctic Circle for the first time and reach the Margaret Bay on the western side of the Antarctic Peninsula. Upon completion of the scientific program, the ship will pick up members of the 26th Ukrainian Antarctic Expedition, who have been working at Vernadsky for almost a year, and then move home through Chile and the Falkland Islands.

We wish a successful voyage to the ship’s crew and the team of scientists!