Isolation of the aggressor from pole to pole: member countries of the international organization for the conservation of the Antarctic call to stop terror of russia against Ukraine

Home
>
News
>
Isolation of the aggressor from pole to pole: member countries of the international organization for the conservation of the Antarctic call to stop terror of russia against Ukraine

On October 24, 2022, the 41st Meeting of the Commission for the Conservation of Antarctic Marine Living Resources, CCAMLR, started in Hobart, Australia. CCAMLR is an international commission with the objective of conserving Antarctic marine life, as well as supervising industrial and scientific activities in areas covered by the Convention, that is, throughout the Southern Ocean.

Since 1994 Ukraine has been a member of the CCAMLR. In the CCAMLR’s area of responsibility, Ukrainian fishing vessels are mainly focused on Antarctic krill, Patagonian and Antarctic toothfish; and Ukrainian scientists, in particular the NASC, shall undertake to conduct relevant research in the Southern Ocean. For example, at the current meeting, updated projects for the creation of marine protected areas will be presented, and joint measures of the CCAMLR parties will be discussed regarding the study of the impact of climate change on the Southern Ocean.

The 41st CCAMLR meeting is attended by 24 national delegations and a separate delegation of the European Union. Since there is a delegation of the russian federation among the participants, our representatives at the plenary session made a statement regarding Russian aggression, with information about the actions of the aggressor state, demanding to stop terror against Ukraine and calling the CCAMLR member states to make maximum efforts for this.

Delegations of the United States, Great Britain, the countries of the European Union, Australia, New Zealand, Norway, and Japan supported Ukraine with their speeches. The delegation of the russian federation also addressed the Commission with its own statement, but the delegations of Ukraine and many friendly countries expressed their refusal to listen to this statement by walking out of the meeting room. Thank you for such support of Ukraine! The isolation of russia as a terrorist state should cover the entire globe, from pole to pole!

The CCAMLR meeting will last for two weeks, until November 4, 2022. We will keep you informed about its work. 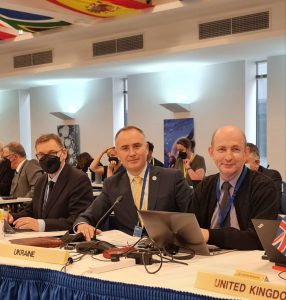 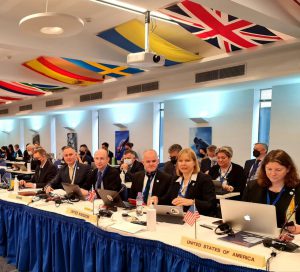