A seasonal group of scientists went to Akademik Vernadsky station

This year, Ukraine is sending to Vernadsky station the largest season expedition for the last 18 years – a team of 26 researchers and engineers.

“Until now, we did not use all our scientific capabilities to the fullest. Now, on the contrary, we focus on their development. The duration of the research period is also the longest over these years – more than 2 months. Scientific tasks are significantly expanding, both on the subject and geographically, ”said Evgen Dykyi, the head of the National Antarctic Scientific Center, during the press conference held on January 17, 2019 in the Ukrainian crisis media center.

Using modern equipment, scientists will carry out the following research relevant for the Ukrainian and world science:

– 3D models of glaciers will be built with the help of special drones and innovative software.

–  A comprehensive study of the diversity of bacteria and viruses will begin.

– The mechanism of “blooming” of the Southern Ocean waters will be studied.

– The distribution of persistent organic pollutants will be studied in Antarctic waters.

– Meteorological studies will be largely automated and will now include the study of solar activity.

A number of experiments will be conducted not only at our station, but also on the islands around it. And some studies, primarily of Antarctic vegetation and soil, will cover areas from Tierra del Fuego and sub-Antarctic islands to the Antarctic Circle.

The 24th season consists of scientists of different specialties, mainly geologists, geophysicists, meteorologists and biologists. Among them there are both veterans of Ukrainian polar studies (in particular, the participant of the first UAE (1996) Volodymyr Bakhmutov) and young scientists.

“Besides, Antarctic research should be considered as a means of science popularization in a country from which, unfortunately, the brain drain continues”, –  said the Deputy Minister of Education and Science of Ukraine Maxim Strikha. – Antarctic research is also valuable in bringing together scientists as well as young scientists. And they make it possible to refute the widespread opinion that domestic science consists only of elderly people who are asleep at the chairman’s table. ” 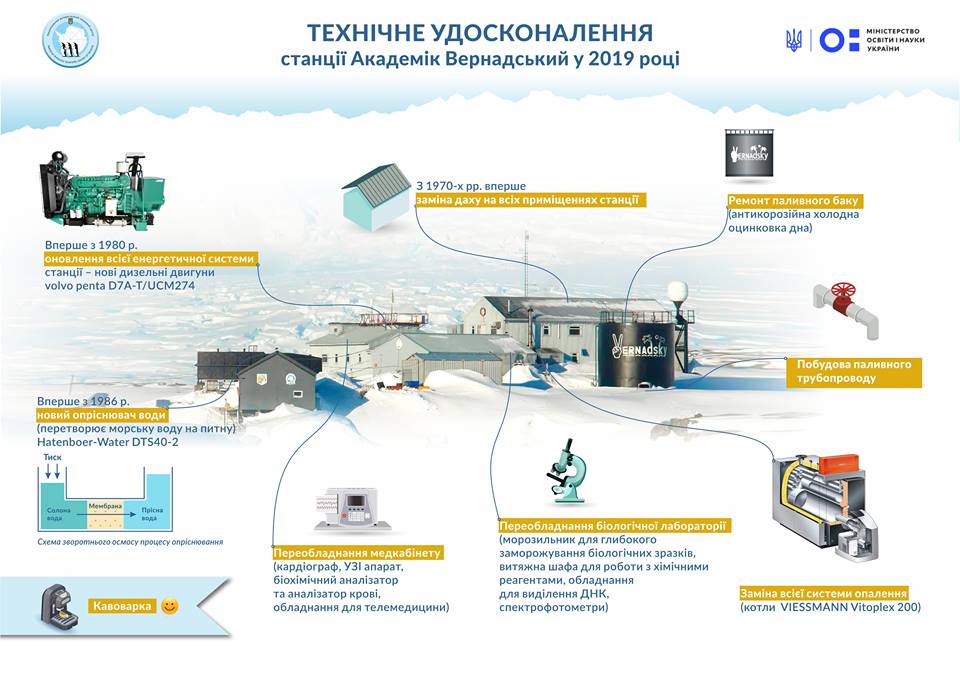 During the current seasonal expedition, the first major overhaul and reconstruction of the station will finally begin, which has not happened since 1996, since the station was transferred by the United Kingdom to Ukraine. The roof of the station will be repaired, the desalination system and other vital systems of the Antarctic scientific base will be modernized, and finally new generators – the “heart” of the station – will be installed. Repair work will be completed in the next Antarctic summer, that is, in spring of 2020.

For these purposes, as well as for the vital activity of the station and Antarctic research during 2019 the state has allocated a total of 43 million hryvnias, reported the head of NASC.

We also remind you that a group of wintering members will go to Akademik Vernadsky in March 2019.