Home
>
About us
>
Team
>
Valentyna Malanchuk 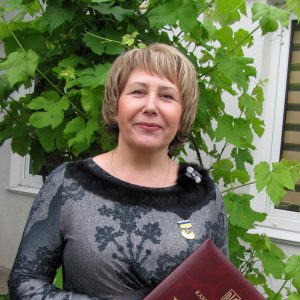 Born in Zhytomyr region in the family of teachers. In 1977 has graduated from the Biological Faculty of Taras Shevchenko Kyiv State (now – National) University in the field of biophysics and received a qualification as biologist and biophysicist, teacher of biology and chemistry.

In the same year, she started her career at the Institute of Endocrinology and Metabolism of the National Academy of Medical Sciences of Ukraine, first – in the laboratory for the creation of an artificial pancreas, later – in the department of endocrine system pathophysiology headed by the famous scientist, founder and director of the Institute Academician V.P. Komisarenko.

From 1985 to 2001 she worked in the Department of Biochemistry of Microorganisms of D.K. Zabolotny Institute of Microbiology and Virology, National Academy of Sciences of Ukraine. Investigated the structure and function of biopolymers synthesized by various taxonomic groups of microorganisms, in particular, glycolytic enzymes, developed methods for their isolation and purification, investigated their substrate specificity, the structural organization of the active center of enzymes, the mechanism of their action and the kinetics of enzymatic reactions. For the implementation into production of the technology of galactose oxidase – an enzyme used in hematology for the transformation of red blood cells of the donor blood, received a bronze medal of the Exhibition of Achievements of National Economy. As a result of the study of glycosidases of microorganisms, she defended her candidate’s thesis.

From 2001 to 2010, she improved her professional skills in the pharmaceutical industry, graduated from European GMP courses and a full course at the Academy of Quality at NTU Kyiv Polytechnic Institute. Valentyna headed the Quality Assurance Department of the INDAR pharmaceutical Closed Joint-Stock Company. She is one of the developers of the quality management system at all stages of the life cycle of the patent medicines – from pharmaceutical development, preclinical and clinical research – to their production, quality control and distribution. Put international and European GMP, GLP, GCP and GDP standards into pharmaceutical practice, was engaged in the validation of technological processes and methods for controlling the quality of pharmaceutical products in accordance with the requirements of the European, British and Ukrainian Pharmacopoeia. According to the results of the activity, the company INDAR received one of the first national and American certificates of conformity of production of patent medicines to GMP requirements. She has got a number of specialized awards, Gratitude of the Kiev mayor.

Since 2010 she has been working as the head of the Scientific and Organizational Department of the State Institution National Antarctic Scientific Center. She is one of the developers of the State Special-Purpose Research Program in Antarctica for 2011-2020, approved by the by the Decree of the Cabinet of Ministers of Ukraine of November 3, 2010 No 1002. She is responsible for ensuring the fulfillment of its tasks and activities on a competitive basis, reports to the central executive authorities on the effectiveness of their implementation, and updates the State Program in the light of trends in the development of international Antarctic research.

Malanchuk is awarded the Certificate of Merit of the Cabinet of Ministers of Ukraine, Gratitude of the Ministry of Education and Science of Ukraine.

She is the author of more than 50 scientific papers, Hirsch Index – 2